Recent events in New York City have once again brought Legionnaires Disease onto the radar for many facilities throughout the Northeast.  The latest Legionellosis outbreak reported in NYC has been allegedly linked back to an infected cooling tower in the Bronx.  It has been reported that the facility in question is now under the watchful eye of the New York City Health Department.  Legionella in a cooling tower is a serious issue because of how a cooling tower operates; not only does the bacteria thrive in an under-treated environment, but the the tower mechanism itself acts as the perfect way to dispurse the bacteria in water droplets into the atmosphere.  As you can imagine, attorneys have already threatened to bring suit, and facility managers across the New Your City are re-thinking their protocols for dealing with legionella. Many building owners are trying to figure out if they have the best water treatment company in New York working for them.  There is a very good chance that there were steps that could have been followed that would have prevented this unfortunate event; and if the American Society of Heating, Refrigerating, and Air-Conditioning Engineers (ASHRAE) get their way, there soon will be.

Your Slimy Cooling Tower is Costing You More Than You Think! 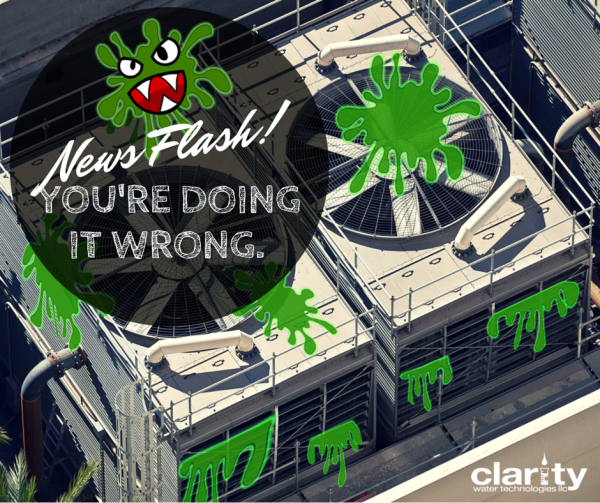 Do you think that your cooling tower is dirty?  If you have biofilm in your cooling tower, bad things are already happening.  For certain, your HVAC system is losing efficiency and you are losing money; but it is possible that there are bigger issues lurking just beneath that slime.